May 12, 2021 Categorised in: Technical articles

MRT-700 is able to detect ground faults on pipes and cables (for this purpose the device must be requested with location functionality). These faults are caused by the deterioration of the coating on pipes and damages in the isolation of the cables, therefore the metallic part of them may make contact with the ground.

In order to perform fault location works it is necessary to use an special frequency – 8KFF – in both transmitter and receiver, and an external sensor – A-Frame – connected to the receiver in order to measure this frequency.

It’s recommended that the conductor to be identified to be completely open at both ends, for this purpose, any connection to ground must be eliminated. If any connection was maintained, this would be the path chosen by the signal to escape to ground and the fault location operation will be much more difficult. 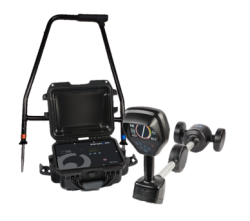 Fault locating can only be achieved with direct connection, so connect crocodile clamps to “Active signal out” connector of the transmitter. Then connect red cable to the conductor of the cable to be located and black cable to the earth spike. It is important to avoid connecting the transmitter when it is turned on or transmitting because high voltages can be generated between clamps.

The spike must be correctly connected to earth in order to achieve a good return of the signal. It is recommended that earth spike to be the first element to be connected and the last one to be disconnected. Place the transmitter and the earth spike as far away as possible from the conductor and the cables, in a 90º angle with the direction of the cable with the connection is being made. This positioning prevents the return of the signal from distorting the location results.

Once the transmitter installation has been completed, assuring a good returning path through the earth, turn on the transmitter and select the -8KFF- frequency and the signal injection level.

After the A-Frame is connected to the receiver, it will be detected automatically and 8KFF will appear on the display, indicating that the receiver is already in fault locating mode. There are two display modes: a basic one which only shows information regarding to fault locating and advanced one which displays the information corresponding to the fault locating feature combined simultaneously with the “standard” tracing display.

As the user moves away from the transmitter the dBs measurement will decrease and the direction of the arrow could fluctuate or disappear completely. The distance between the spike and this “minimum measurement” can be taken as safety reference distance, that means this is the distance that must be taken between two consecutive measurements with the A-Frame.

Even though that the cable path it´s known, it´s recommended to perform a side sweep with the A-Frame to assure the positioning of the fault. For that, in the determined point the A-Frame must be turned 90º and carry out the same process. The magnitude measurements will behave in the same way; so that the point in which the direction of the arrow changes will be the point where the fault is located.

If the dBs measurements in the faulty area are similar to the reference measurement it indicates that this is the unique fault in the conductor, if not, the conductor inspection works should be resumed in order to other possible faults. It could also happen that there are faults with big difference of severity (impedance). A high severity fault could complicate the detection of other low severity faults, in these cases it is recommended to solve the fault and the repeat the identification process.

When the conductor is under a paved surface, sometimes the fault can be located by working in the land adjacent to it. In case that there is not possible of doing that, many times signals can be detected directly on the pavement. To improve the grounding of the A-Frame spikes, a small amount of water can be poured over them.

Do you want to know more about this topic or our devices? Click on the link! 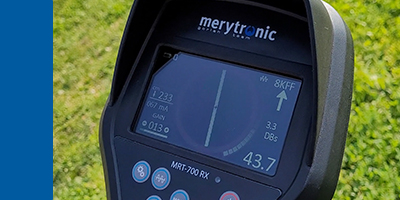 Merytronic is member of the Prime Alliance

Merytronic is a member of Prime Alliance. Founded in 2009 by eight leading companies in the industrial sector, Prime Alliance is…

Identification of live electrical cables, a need The repair of breakdowns and maintenance works on electrical distribution cables in electrical…

Energetab, the largest international fair for the energy industry in Poland, will hold its 35th edition from 13 to 15…